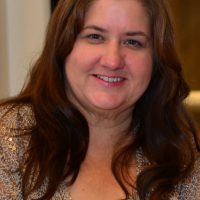 “Unfortunately, Jenelle was diagnosed very late, which is not uncommon in pancreatic cancer given the vague nature of the symptoms,” Beeler said. “By the time they found out it was cancer, it was too late for them.”

Her death came just three weeks after her diagnosis at the age of 52.

One of seven children, Jenelle was closest in age to Beeler.

“My mom says we spent so much time together when I was a baby that I cried every time my sister left. I remember Jenelle taking me to my first concert in high school,” Beeler said. “Jenelle was a beautiful person who always cared about people and was rarely seen without a smile on her face.”

Three years later, in 2019, Beeler was diagnosed with the same condition. It started a year earlier when he started getting stomach and back pains. He also lost weight.

“I thought the stomach ache was stress related and as a runner I struggle with back pain from time to time. None of these symptoms seemed too abnormal or serious. This is a common problem in pancreatic cancer detection,” Beeler said. “My doctors thought I had acid reflux and had me try different medications to treat it. When those didn’t work, my wife said, ‘Tell them you want a scan and a blood test.’ That’s when they found the cancer.”

When the call came with his diagnosis, Beeler said he was “totally shocked.”

“My daughter got married five months later, and I immediately thought, ‘Am I going to be at her wedding?'” Beeler said. “It was incredibly difficult to process, but thankfully my wife took over and helped us focus on treatment and develop a plan to combat this disease.”

When Beeler was first diagnosed, his tumor was inoperable because it was intertwined with a major blood vessel. He underwent eight rounds of chemotherapy and a week of radiation to try to shrink the tumor so doctors could operate on him.

“During my treatment, they ran genomic tests on my tumor and found that I had a rare condition (known as MSI high) that meant I was eligible for immunotherapy. This is a new approach that uses your immune system to fight the cancer,” he said. “This treatment was not available when my sister was diagnosed and is actually only available to a very small percentage of pancreatic cancer patients today. I believe this treatment was a game changer as it eliminated all my pain almost immediately and when they did a biopsy on my tumor they found all the cancer cells were dead.”

Since 2019, Beeler has participated in Pancreatic Cancer Action Network Indianapolis PurpleStride with his team, the Jay Walkers, named in honor of his late sister. The event is the premier fundraising event for the Pancreatic Cancer Action Network, or PanCan. The money raised will be used to advance scientific research and provide resources for patients, caregivers and healthcare professionals. This year, Beeler and his wife Colleen are PurpleStride chairs.

“I think there is very little awareness of pancreatic cancer and how deadly it is. People who have been exposed to someone with pancreatic cancer know the odds are slim and the results are often not positive,” Beeler said. “Without research into cancer treatment, this could not have helped me. That is why research and scientific advances are so important. More research is needed to find ways to make this type of treatment available to more patients.

“There are some incredible advances in the treatment of cancer, and I firmly believe that if we continue to focus on new treatments, we can turn the tables.”

More than 60,000 Americans will be diagnosed with pancreatic cancer this year, and it will kill 50,000, including 1,070 Hoosiers, making it the third leading cause of cancer death in the United States, according to the National Cancer Institute.

If you or someone you know is diagnosed, you can call Patient Central at 877-2-PANCAN for free personalized resources.

These Utah pain specialists can help you without surgery or opiates

ROACH: What is the next step in osteoarthritis of the spine?...