Thailand officially removed cannabis and hemp from category 5 of its narcotics list on June 9.

This means that these once strictly forbidden plants can now be grown at home for cooking and medicinal purposes.

When in Thailand you can also smoke privately and enjoy the medicinal and health benefits of eating edibles and drinking tea, coffee or anything with cannabis.

However, those wishing to grow cannabis plants for commercial purposes still need to obtain permission from the authorities.

But a degree in cannabis science? Well, that’s one more step in making Thailand a cannabis hub in Southeast Asia.

Jongkasem Julakham-Platon, a restaurateur and owner of Toto Inasal, a Filipino-Thai restaurant in Bangkok, has partnered with the Waldo 18 company. The Company provides commercial supply chains for the cultivation, processing and sale of medicinal plants and their derivatives.

The Waldo Institute of Petchburi, its education and research branch, is accredited by the Thailand Office of the Higher Education Commission (OHEC). It is under the supervision of the Faculty of Science of Suan Sunandhta Rajabhat University. The institute offers advice, training, crossbreeding experiments, etc.

“The institute offers bachelor’s, master’s and PhD programs in cannabis science. They are also developing a new breed called the Rocher Breed. It is a very resilient cannabis strain with a high survival rate. Toto Inasal will also help experiment cannabis products with food and beverages. ‘ said Julakham-Plato.

She also said that Toto Inasal is the sole representative of Waldo 18 for the Philippine market as well as future collaborations with Philippine universities or research centers.

There is a difference between hemp and marijuana, even though they belong to the same type of cannabis. Marijuana (indica) types are shorter and have thick leaves, while hemp (sativa) grows taller and has pinnate leaves.

The difference also extends to the chemical compounds – cannabidiol (CBD) and tetrahydrocannabinol (THC). Hemp contains less than 0.3 percent THC, while marijuana has higher THC levels. THC is a psychoactive substance. Both contain CBD, the main component of oil extracts from the leaves, and are non-psychoactive. Recently scientists and researchers claimed that there really is no difference and there is only one strain – Cannabis sativa L.

“It is still fairly early to predict whether other ASEAN countries will follow Thailand’s lead. As Thailand’s market gains momentum, cannabis exports will follow,” Julakham-Platon said.

“Therefore, there is a greater chance that other ASEAN countries might as well consider legalizing cannabis to take their share of the global market. Muslim countries and the Catholic-dominated Philippines may not be on the first list of countries but could be consumers of cannabis by-products,” she said. 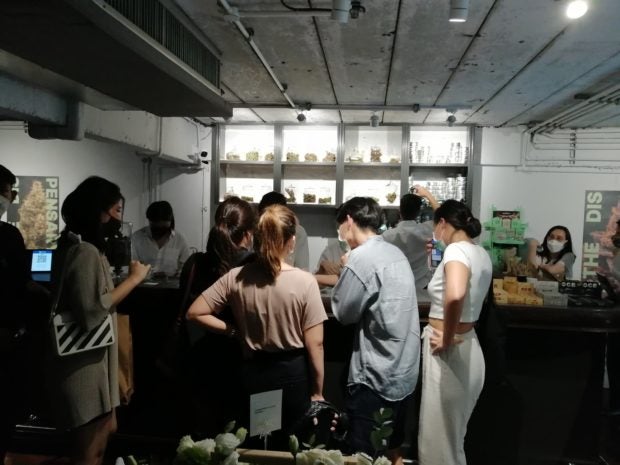 Scene at The Dispensary, a newly opened facility where people can buy cannabis for medical use. PHOTO COURTESY OF JONGKASEN JULAKHAM-PIATON

In December 2018, Thailand became the first country in Southeast Asia to legalize the use of cannabis for medicinal purposes. Initially, only government hospitals were allowed to dispense cannabis oil (CBD oil) to patients undergoing chemotherapy and suffering from various chronic conditions on doctor’s prescription.

In January 2019, the World Health Organization (WHO) changed the classification of cannabis from Schedule 4 to Schedule 1 “due to evidence that some cannabis-based preparations have medicinal uses”. Appendix 4 is the list of the most dangerous substances such as heroin and carfentanil. This also prompted the United Nations Commission on Narcotic Drugs (UNODC) to remove cannabis from Schedule 4 of the 1961 Single Convention on Narcotic Drugs. But most countries in the region have yet to consider this.

Cannabis is grown in some areas in Myanmar, Cambodia, Vietnam, Laos and the Philippines. It has a long history in Southeast Asia. It is not known exactly when it was first introduced to Thailand and the rest of the region. Ganja ((กัญชา) is a Sanskrit word and also a Thai word for marijuana. It has been used as medicine, specifically as a pain reliever, food, flavoring, substance and for its psychedelic effects.

In Vietnam, those found to grow cannabis on a small scale can be fined from VND2 to VND5 million (US$86.16 to US$215.40) and imprisoned from six months to seven years.

Cannabis is illegal in Cambodia, but there are “happy restaurants” across the country selling cannabis-infused edibles.

Although cannabis is widely cultivated and consumed for food by many indigenous peoples in Laos, it remains illegal.

Both Laos and Cambodia plan to study cannabis for medicinal purposes.

Cannabis remains a narcotic in Malaysia, Indonesia, Brunei and Singapore. The perpetrators face imprisonment and, in the worst case, the death penalty.

The Myanmar government prohibits the sale or supply of cannabis. If the perpetrator is found guilty, he can be punished with imprisonment for a minimum of 15 years without limitation of the sentence. They too face the death penalty.

In the Philippines, use and possession of cannabis, even in small amounts, is punishable by imprisonment and fines of up to Pta 10 million under Republic Act 9165 or the Comprehensive Dangerous Drugs Act of 2002.

Manansala and his group have been campaigning for medicinal cannabis since 2014. He was also part of the group that wrote the first bill to go to the House of Representatives to legalize medicinal cannabis in the Philippines. Isabela Rep. Rodolfo Albano III introduced it at the 16th Congress as House Bill #4477, known as the Proposed Compassionate Use of Medical Cannabis Act. It was resubmitted to the 17th Congress of the Philippines and is currently House Bill No. 180 listed.

Jheck Alcera suffered from insomnia, depression and alcohol addiction in 2010. She claimed that cannabis “cured” her, albeit “illegally” because of the stigma and laws criminalizing its use.

In 2017, Alcera met with fellow advocates from the Philippine Cannabis Compassion Society, which is made up of doctors, lawyers, and others who suffer from various diseases like her.

“Nobody should be jailed for a plant,” Alcera said.

“The benefits of legalizing cannabis outweigh the downsides. Stakeholders must popularize the issue and engage in vigorous educational campaigns, which must continue until the ideology of the war on drugs is neutralized. These campaigns must be based on science, human rights and the concept of body sovereignty,” Manansala said.

Julakham-Plato said that the use of cannabis in traditional Asian medicine is nothing new.

“There are many benefits ranging from medicinal to cosmetic, and the only downside is people’s bias towards cannabis. Laws are in place, people are well informed, and the government has conducted a number of experiments and risk calculations. I don’t think there will be any problems at all,” Julakham-Platon said.

Thailand also planned to distribute one million seedlings nationwide. On June 10, 1,000 seedlings were given away by the Buriram Provincial Ministry of Health.

People can also buy cannabis leaves for smoking (private) at the cannabis dispensary, which opened on June 9th. Edibles, drinks and oils are available at many cannabis coffee shops in Bangkok and other provinces.

Cannabis or cannabis derivatives such as edibles, cosmetics and oils are currently not allowed to be taken outside of Thailand.

Do not miss any news and information.

The Best CBD Sleep Products of 2022

Smilz CBD Gummies “Smiles” – Get Rid of your anxiety with...