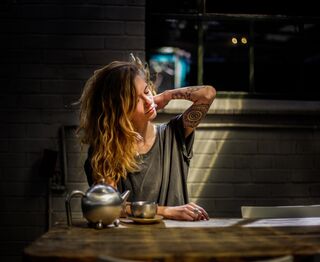 It always starts on the right side of my neck, a single, deep spot that hurts so much I press on it as hard as I can because I think that would somehow untie the knot and ease the pain. People often comment that my head is tilted to the right, that I keep pressing that spot, rubbing hard, but mostly pressing a finger or two in hopes of relief. I later learned from my physical therapist that this practice only made the problem worse.

Although I knew the neck pain was somehow related to my migraines, I didn’t realize that this was migraines, often the first stage for me. I always thought it was more of a warning that the neck pain could lead to a migraine attack if I wasn’t conscientious. Often times, when I twist my neck wrongly, too fast, or bend badly, the pain gets worse and can trigger wandering pain along the occipital nerve and explode into an intense throb behind my right eye.

In the past, neck pain was thought to be the trigger for migraines. A 2018 study by the Journal of Headache and Pain found that “Neck pain is actually a symptom of a migraine attack. Unfortunately, it continues to become an overlooked symptom and many patients mistake it for neck pain syndrome … that neck pain is usually a symptom of migraines, not a cause. “

According to Dr. Sandhya Kumar, a neurologist who specializes in headaches, neck pain is often on the same side as the headache. “So if a person has a headache on the right side during the migraine attack, they have neck pain and a tightness in the right side of the neck.” Kumar also pointed out that neck pain is more common in patients with chronic migraines.

I now know that I must take appropriate steps to fend off a full blown attack. When my neck pain starts I usually turn to my Cefaly machine, often try to schedule an appointment with my chiropractor, and also see my physical therapist regularly working right on my neck (her specialization is working with chronic migraineurs). When I take the first rescue Medication at the first sign of pain, I also reduce or eliminate the pain.

But in all honesty, I’ve had cervical pain on my right side more days than not. If I were to use my first emergency medication every time I really needed it, I would go out early in the month because of the small monthly amount that insurance covers.

How common is neck pain with migraines?

The Will Erwin National Headache Foundation reported that the 2018 Migraines In America Survey found that 69% of migraineurs surveyed said they struggled with neck pain when they have migraines. Another study published in the Headache Journal found that among the 113 people examined, neck pain was more common than nausea in migraineurs. Many people have reported that neck pain begins before a migraine headache, although this precursor lasts for many after a migraine attack. One study showed that 90% of the times patients thought they had sore throat (neck pain) disorder actually had migraines (The Will Erwin National Headache Foundation).

Dr. Kumar pointed out that

How can we treat neck pain?

If I can treat the pain in a timely manner (not always successfully as I now view the neck pain as a day of mild to moderate migraines), I can stop a full-blown seizure.

Below are some of the recommended treatments:

So when I catch myself pressing myself halfway up my neck at this point, I know that while I am working on this article, I will have to straighten my neck and grab my Cefaly device for the next lesson.

Bright spots in the community

Insights into the Global Healthcare Discount Plans Market to 2026 –...

Arrowhead Clinic in Hinesville explains who pays for a chiropractor after...