Preston Phillips, the spinal surgeon who was shot dead in Tulsa this week, was a former colleague of mine in Seattle. I didn’t know him well but I interacted with him at conferences and in patient care. He was as well-intentioned a surgeon and nice person as I have worked with. It’s easy to blame him for a failed surgery, but it’s not his fault.

The patient was in chronic pain and almost none of us in medicine are trained to treat him effectively and the data has been right in front of us for decades. Somehow we treat almost all symptoms and diseases from a structural perspective, while most of them arise from the body’s physiological state of being in a state of flight or fight.

Health professionals want to heal. If we don’t have the tools to help you, all parties get incredibly frustrated.

Additionally, the most fundamental healing method is to feel safe with your doctor, as this causes a shift in your physiology into a safe state, sometimes referred to as “rest and digest.” This is the physiological state in which healing takes place.

We in medicine have limited ability to make patients feel safe because the medical business is structured in such a way that we cannot spend time with our patients. How can we know you? How is your life? Are you feeling stressed? How can we methodically understand your care up to this point and make thoughtful decisions about what to do next? What has been done to improve your chances of a good outcome from the surgery?

Modern medicine is moving in a dangerous direction when it comes to your care. The main factor in deciding to offer a procedure or treatment is often whether it is covered by insurance and how well it is reimbursed. The effectiveness of the intervention is a minor consideration. In fact, we are sometimes encouraged to perform surgeries that have proven ineffective. Furthermore, there is little accountability for the results except in the case of gross negligence.

The medical business, like any other business, is designed to make a profit. There are computer programs that monitor doctors’ contribution to the profit margin. Most revenue comes from performing procedures, many of which have been shown to be ineffective.1 Adverse risks include unnecessary costs, significant risks, and patients who are often worse off than they were before the procedure.2 It has also been documented that only about 10 percent of spine surgeons address the known risk factors for poor surgical outcomes.3

dr Ian Harris, an orthopedic spine surgeon from Australia, has done extensive research on the use of ineffective procedures. He wrote a book, Surgery: The Ultimate Placebo, in which he extensively documents the data behind many pain treatments that have proven useless. But that hasn’t stopped their use.4

We doctors and surgeons want to remedy the situation – that’s what we’re trained for – but we don’t know any alternative measures. It’s like trying to hit a major league baseball field with a golf club. I wouldn’t have any insight either – unless I hadn’t suffered from chronic pain for over 15 years.

There are many ways to get your body to transition from threat physiology to a safe physiological state. One term for this is “dynamic healing”. In this state, inputs (your stress) are processed in a way that has minimal impact on your nervous system; The nervous system can be calmed, and there are ways to directly stimulate the powerful anti-inflammatory effects of the vagus nerve.

Effective treatments are often not covered by health insurance or do not bring enough income to the medical business. For example, more than 1,000 research papers have shown that expressive writing is helpful for several medical conditions.5 However, I had never heard of it until I happened upon it in 2003. It costs nothing, has minimal risk, and is rarely offered as a treatment option. It has been shown to relieve symptoms of asthma, depression and rheumatoid arthritis, improve students’ athletic and academic performance, speed wound healing and reduce many other symptoms.

I had dinner with one of the pioneers of this technique, James Pennebaker, a psychologist from Austin, Texas. The methods may differ, but it has only been reinforced as an effective tool. There’s a lot of debate about why it works – but none about whether it works.

Mindfulness-based stress reduction has also been shown in many studies to reduce pain and is not usually covered by insurance. I’ve seen several excellent pain programs in the Puget Sound area closed because they couldn’t afford to keep them open.

Listening is a proven healing technique and a prerequisite for understanding a patient’s overall situation. dr Francis Peabody, a prominent Boston physician, was concerned about the intrusion of technology into the doctor-patient relationship. One of his more poignant observations: “The secret of care is care for the patient.” He wrote these words in 1927, when the intrusion of technology into the patient-doctor relationship was far less than it is today.6

What about the patient?

A person suffering from chronic pain is indescribably trapped. I call it “The Abyss”. These are just some of the ways to get there:

· You have been told that there is nothing wrong and that you need to live with your pain as best you can. The reality is that there is a physiological explanation for all of this.

· There seems to be no way out. Most people lose hope. The solutions are there, but are not offered. Patients who break out find the healing process “disturbingly easy.”

· They are stamped by almost everyone, including the medical profession. These include drug seekers, simulation offenders, lazy, unmotivated, making things up, not tough enough, and more.

When you are trapped by pain, your frustration and anger run deep and strong. This scenario creates an intense flight or fight response, your brain’s blood supply shifts from the thinking center to the survival midbrain, and your behavior is irrational.

Another problem that often goes unacknowledged is the inducing of depression when people’s hopes are repeatedly dashed. This was impressively demonstrated by Harry Harlow.

Causing Depression – “The Pit of Despair”

Psychologist Harry Harlow pioneered research into human mother-infant bonding using primates. In the first half of the 20th century, mothers should touch their children as little as possible. Leading mental health professionals have aggressively discouraged mother-child interaction in research, lectures, books, and the media. Interestingly, or tragically, their recommendations were based on rodent research. Harlow was the driving force behind the change in opinion by studying different species of monkeys. His story is well told in an entertaining book, Love at Goon Park by Deborah Blum.7

In the 1960s, also based on primate research, Harlow turned his attention to some of the finer details of human interaction. He wanted to understand how to trigger depression. He used various isolation methods and ways to feign parental neglect or even abuse. He could create seriously disturbed monkeys, but not depressed ones. 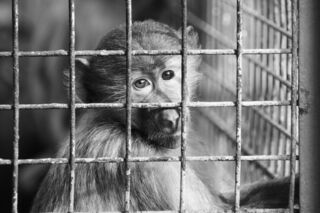 Eventually he found a consistent methodology by developing an apparatus that resembled an inverted pyramid. The sides were steep but still allowed the monkey to climb to the top to look out of the mesh-covered top. For the first few days, the monkeys kept climbing up to look outside and quickly slid back down. Within a few days they gave up, sat in the middle of the device and didn’t move. They became almost unresponsive, and when they returned to their families, they did not return to their normal social behavior. It didn’t matter what problems the monkey had before the experiment. The abnormal monkeys got worse and normal monkeys suffered the same fate. Even the “best” monkeys from stimulating and interactive families would succumb. The researchers were angered and dubbed the device “the It of Despair.” This ‘learned helplessness’ was thought to result from a combination of a sense of loss of a good life, reinforced by casual glimpses of the outside world, and a sense of being trapped. Within half a week, each monkey spiraled down.

The surgeon did what he was trained to do with the best of intentions. I would feel bad for the first eight years of my career if I couldn’t find a way to relieve my patients’ pain through surgery. The patient was trapped at an indescribable level, and surgery is often viewed as the definitive answer. The surgery itself requires more pain and a lot of anxiety about the whole process. Therefore, the disappointment is particularly great when it fails.

The literature also shows that pain often worsens when surgery is performed on untreated chronic pain.2 Personally, I was not aware of these data until I gave up my surgical practice. For Sagittarius to act as he did is unacceptable – but understandable. Suicide is problematic in patients suffering from unrelenting pain.

Physical therapy, chiropractic adjustments, injections, acupuncture, professional retraining, medication, traction, inversion tables, and finally surgery. How many times can your expectations be dashed before you lose hope? It is not difficult to understand actions taken in such a state of mind.

All parties were victims of the drug business and I blame him.

The medical business has trapped both providers and patients, and regulations for computerized medical records are compounding the problem. There are real solutions, but both doctors and patients will have to demand them.

The best day spas in Canberra

CEOs explain how to respond to the biggest challenges in healthcare