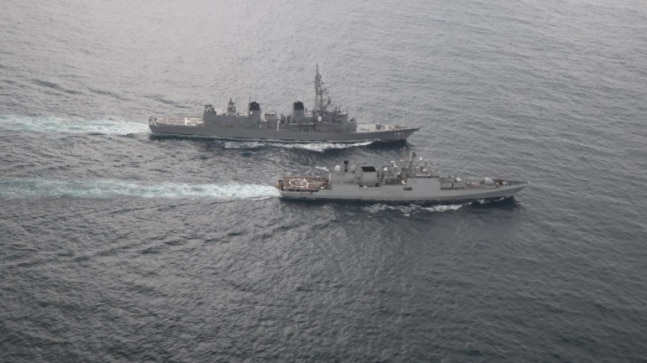 The fifth edition of the three-day India-Japan bilateral sea exercise, JIMEX, between the Indian Navy and the Japanese Navy Self-Defense Force in the Arabian Sea ended on Friday.

During the exercise, the ships and aircraft of the Japan Maritime Self Defense Force (JMSDF) and the Indian Navy (IN) conducted a rapid pace of operations that focused on the air, surface and subterranean dimensions of maritime operations, as well as the air domain Statement said.

In the 5th edition of the bilateral #maritimen ex #JIMEX, ships and aircraft from @jmsdf_pao_eng & #IndianNavy were subjected to operations at a rapid pace with a focus on air, surface and underground dimensions from #MaritimeOps as well as Air Domain (1 / n) operated. #BridgesofFriendship https://t.co/Onxz9YNz7d pic.twitter.com/ZBHWLy1HXw

Beyond Visual Range (BVR) combat exercises of MiG 29K including simulated air strikes.
Precision, coordination and high interoperability as well as a high level of trust and understanding that has been built up over the years (4 / n). # StrategicPartnership # MaritimeInterest @ ModJapan_en @DefenceMinIndia pic.twitter.com/CHebPslPcY

Determining the operational pace from the beginning, the units exercised the war scenario at sea with P8I Long Range Maritime Patrol Aircraft of the Indian Navy, which provided maritime reconnaissance support to both navies. The units practiced Replenishment at Sea approaches and took over the connection of fuel rigs between Kaga and Kochi.

The exercise also included complex over the horizon targeting exercises and surface artillery shots at an expendable target. An advanced coordinated anti-submarine defense exercise with an underwater target deployed by JMSDF saw surface units and the Indian Navy P8I aircraft training with seamless coordination. Flag officers of the two armed forces also met during flight operations on the flight decks of Kochi and Kaga, in keeping with the true spirit of military friendship.

The precision, coordination and high level of interoperability not only reflected the high standard of professionalism and readiness of the two navies to deal with threats at sea, but also the high level of trust and understanding they have built up over the years.

The complex maritime exercises carried out will enable the two navies to further strengthen their already far-reaching strategic partnership and, if necessary, to jointly safeguard their maritime interests and to ensure peace, security and stability in the region.

The exercise to liquidate JAKFED’s assets will be completed in the...