Medication-overuse headache (MOH) is defined as a chronic headache that occurs on 15 or more days per month for more than 3 months in patients with a pre-existing primary headache caused by overuse of symptomatic headache medications, and the overall prevalence of MOH in the general population is about 1–2%.1 According to the Global Burden of Disease Study 2015, MOH is the 20th cause of disability worldwide, which causes an impairment in the quality of life for sufferers and causes a heavy financial burden on society.2

This cross-sectional study was conducted between June 2016 and October 2019. The participants were recruited from the MOH patients attending the Department of Neurology, Fujian Medical University Union Hospital. Only patients who met all the following criteria were enrolled in the study: (a) diagnosis of MOH based on the third edition of the International Classification of Headache Disorders (beta version);15 (b) headache duration ≥ 1 year; (c) without preventive treatment or detoxification before; (d) age between 18–80; (e) absence of dementia, including Alzheimer’s disease, vascular dementia, and frontal temporal dementia, severe mental illness, neoplastic diseases, infectious diseases, rheumatic diseases or connective tissue diseases. Healthy subjects without a personal or family history of primary headache visiting our hospital for medical checkups during the study period were served as a healthy control group. All procedures performed in studies involving human participants were in accordance with the 1964 Helsinki declaration and its later amendments or comparable ethical standards. This study was approved by the Ethics Committee of Fujian Medical University Union Hospital and informed consent was obtained from all individual participants included in the study.

The age, sex, years of schooling, accompanied hypertension, diabetes, smoking history, underlying primary headache, disease duration, and monthly headache days of the participants were investigated. Smoking history was defined as smoking at least 3 cigarettes per day on average for more than one year.

General cognitive function, anxiety, depression, and sleep quality were assessed with Montreal Cognitive Assessment (MoCA, Chinese-Beijing Version) (www.mocatest.org), Hamilton Anxiety Rating Scale (HAMA),16 Hamilton Depression Rating Scale (HAMD-24),17 and Pittsburgh Sleep Quality Index (PSQI),18 respectively by two trained physicians (Shenggen Chen and Hanbin Lin) blind to the clinical data. MoCA scores more than 25 (of 30), HAMA scores less than 7 (of 56), HAMD-24 scores less than 8 (of 76), and PSQI scores less than 7 (of 21) were classified as normal. According to the MoCA scores, the recruited MOH patients were divided into two groups, ie, patients with MoCA scores of more than 25 were classified into MOH with normal cognition group, and patients with MoCA scores of less than 26 were classified into MOH with cognitive impairment group.

Our study indicated that MOH patients had significantly lower MoCA scores, especially in the domains of visuospatial and executive function, attention, and orientation, while they had significantly greater HAMA scores, HAMD-24 scores, PSQI scores, and deep white matter hyperintensity scores compared to healthy controls. And in MOH patients, the age, disease duration, monthly headache days, and periventricular white matter hyperintensity scores in patients with cognitive impairment were greater than those in patients with normal cognition. Moreover, the MoCA scores were negatively related to age, disease duration, monthly headache days, and Fazekas scale scores, and disease duration and monthly headache days were significant predictors of cognitive impairment in MOH patients.

MOH was considered to be associated with psychiatric comorbidities such as depression, anxiety, and insomnia,22 and these comorbidities could be risk factors in the evolution of migraine into MOH.23,24 Increasing headache frequency was associated with risk of occurrence of anxiety, depression, and insomnia,25 and higher migraine frequency was correlated with greater symptom scores of anxiety and depression.26 MOH patients showed a high rate of depression and anxiety, which could negatively affect their headache attack,27 and depression and anxiety were found to be negative predictors in terms of treatment response in chronic migraine patients with or without medication-overuse.28–30 Moreover, lowered depression scores predicted a positive outcome of MOH detoxification.31 Furthermore, the volume of lower hippocampal subfields was negatively related to anxiety conditions in MOH patients.32

Recent studies suggested an increased prevalence of WMLs in migraine patients, especially deep WMLs,33 and our previous study showed that MOH patients had a greater prevalence of high WML load and they were at elevated risk of high deep WMLs load compared to healthy controls,7 which was in line with our finding that MOH patients possessed greater deep white matter hyperintensity scores compared to healthy controls.

Several limitations in this study should be considered when interpreting the findings. Firstly, the cross-sectional survey of this study indicates associations between cognitive impairment and some risk factors. However, this study cannot determine whether these associations are causal. Additional longitudinal cohort studies will be needed to carry out the evaluations. Secondly, due to the strict inclusion criteria, a relatively small number of participants were enrolled into this study. Additional studies with a larger sample size are required to confirm our results.

The authors report no conflicts of interest in this work. 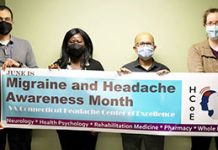 Headaches that are severe and frequent and yet treatment techniques are...