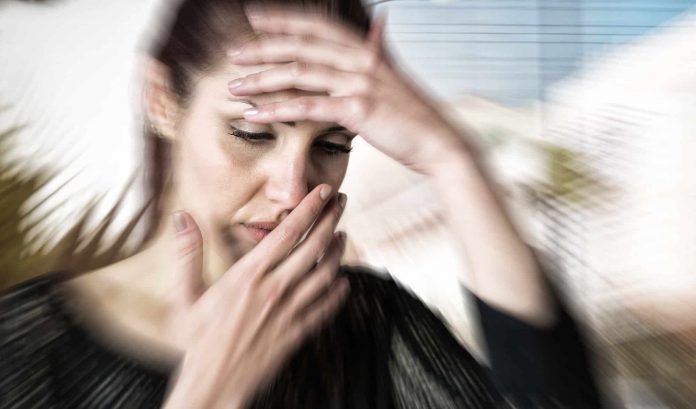 On a December day while I was sitting in front of my computer, a sparkling, glittering object took over my view. For about 20 minutes a large crescent moon with silver shimmering sequins appeared in my eyes. I put my head in my arms because I couldn’t go on working. And then I called my ophthalmologist because I was concerned it was a retinal tear or detachment.

It turned out it wasn’t a torn retina and I didn’t have to worry. I had an eye migraine – also called a visual migraine or an ophthalmic migraine – that creates the aura associated with a migraine but without the tell-tale headache.

Eye migraines affect women more than men. One study estimates that it affects 3% of women and 1% of men. And good news: they are usually not a cause for concern; Instead, they’re just a short-term, stupid inconvenience.

Symptoms and causes of eye migraines

“The most common thing people see is some sort of arc in their vision that looks like a shimmering rainbow,” says Kimberly Blankshain, MD, neuro-ophthalmology fellow at UI Health. Sometimes people see unusual shapes or colors, zigzag lines, a kaleidoscopic pattern, or wavy lines that look like waves of heat from a grill.

Typically, the visual disorder lasts 15 to 30 minutes. “The classic thing is that it is on both eyes, takes a few minutes to an hour and then disappears just as quickly,” says Blankshain.

While no one knows exactly what causes ocular migraines, researchers suspect it is a contraction or spasm in the blood vessels in the visual center of the brain or the occipital lobe. “The blood vessels can cramp a little. It temporarily changes blood flow to different parts of the brain and causes symptoms, but we don’t fully understand why or how it happens, ”says Blankshain.

Possible triggers are the same as for migraines: chocolate, red wine, aged cheese, caffeine, hormone changes, stress, dehydration and irregular sleep, among others.

Treatment is not required unless a migraine headache accompanies visual symptoms. Just take some time out, avoid triggers, and rest your eyes until the symptoms go away. Some medications and lifestyle changes can help with migraines.

Eye migraines can occur anytime, but anecdotally they often appear after the holidays when many people have routine changes, says Michelle Andreoli, MD, an ophthalmologist at the Northwestern Medicine Department of Ophthalmology and spokesperson for the American Academy of Ophthalmology.

“Interestingly, we hear this most often in January,” says Andreoli. “In January I will probably see several people a day [with ocular migraine]. It is often vacation related; people got a couple of bottles of red wine for the holidays or people got a funny peppermint rind from an aunt who had too much dark chocolate in it. “

In addition to food and drinks, sensory triggers can also trigger eye migraines. A strong smell, loud noise, or bright light – like looking at a sunset – can cause eye migraines in some people.

“They are much more common in people with a history of migraine headache, a history of motion sickness, especially as a child, and a family history of headache,” said Joseph Garber, MD, an ophthalmologist with Eye Physicians & Surgeons of Chicago and an assistant professor at Rush University Medical Center. Migraines and motion sickness both involve abnormal activity of the reflexes in the brain stem that processes the senses.

“While [ocular migraines] can be unsettling and annoying and usually do not lead to any significant problems. They go away and your eyes are fine, ”says Garber. “The good thing is that it is very rarely, if ever, associated with anything serious.”

When should you call the ophthalmologist?

If you have a visual disorder, call an ophthalmologist who can rule out other more dangerous conditions, such as a tear in the retina or a temporary ischemic attack, also called a mini-blow. Under these conditions, you will usually only see a blink in one eye, not both – for example, if you close your left eye the symptoms will persist, but if you close your right eye the blink will go away. Retinal tears can also be associated with an increase in floaters in your eyesight.

“In a retinal event, you see a little flash on the side of the vision and then it’s gone. And a minute later you get another one, and then it’s gone. And a few minutes later you get another couple, and then they’re gone. They’re much more unpredictable, ”says Andreoli, who recommends checking the American Academy of Ophthalmology’s eye health website for more information about eye diseases.

If you’re driving, if you get an aura, stop and wait for it to pass, says Andreoli. You don’t want the image to block your view while driving.

“The event itself is harmless and it will pass,” she says. “The time you worry is when people are driving or when they have an abrupt change in behavior; for example, if someone has never had these in their life, and then they get a lot of them. Everything that appears new to a patient is worrying. “

If you have symptoms, don’t hesitate to see an ophthalmologist, says Garber, who often does a visual field test to check for other problems.

“If there is something strange, we can pick it up sooner rather than later. We’d rather see people with it and say, ‘You know what, your eyes are nice, you don’t have to worry,’ ”he says.

I’m glad I went to the ophthalmologist to have my eyes checked, even though I was embarrassed when he told me not to worry. I haven’t experienced any more eye migraines, but chances are I will at some point in the future.

But now I know that when I see a glittering crescent moon sparkling like a diva I can sit back and enjoy the show and realize it is fading harmlessly.

Eve Becker is the editor of Chicago Health, an award-winning writer and former editor-in-chief of Tribune Media Services.

The Migraine Surgical Clinic is the premier headache and migraine management...