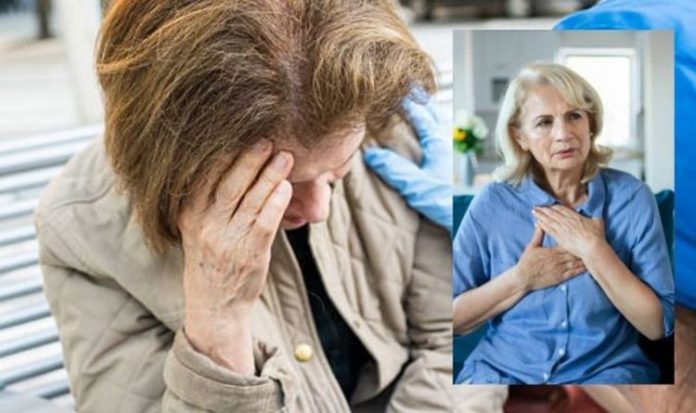 There are 1.3 million stroke survivors in the UK and around 100,000 people suffer a stroke each year. Certain medical conditions can increase your risk of stroke, and as we get older we are at greater risk.

Stroke is a serious condition. It happens when the blood supply to part of the brain is cut off and brain cells die. Perhaps one of the lesser-known risk factors is a form of headache.

Migraines haven’t been shown to cause stroke, but if you have migraines with aura you’re at a slightly higher risk of stroke, according to the Stroke Association.

About 30 percent of people with migraines have migraines with aura, according to the charity.

These usually begin with an “aura” in which certain symptoms develop gradually over five to 30 minutes and last for less than an hour. The headache can occur with or after the aura.

These symptoms have three main areas.

First are visual changes. This is the most common aura symptom, and the changes may include flashing lights or blank spots.

Migraines with sensations such as tingling, tingling or numbness, weakness or a feeling of twisting also fall into this category.

Less often, you may have difficulty speaking or hearing and feel fear or confusion and even be paralyzed.

“As far as we know, migraines don’t cause strokes. However, in some people, migraines can increase the risk of stroke.

“That doesn’t mean they’ll have a stroke because they have migraines, but the chance they will get one is higher than if they didn’t have a migraine,” says The Migraine Trust.

However, studies show that the risk of ischemic stroke increases in women with migraine aura under 45 years of age, women using oral contraceptives, women who smoke, and people who get migraines with aura for the first time after age 50 is.

“In older people with migraines, the evidence doesn’t show that migraines are a risk factor for stroke,” the charity says.

As a risk factor, you cannot change a migraine with aura. However, there are a few things that can help control other risk factors for stroke.

Drinking too much alcohol regularly increases the risk of stroke, and the UK government says it is best not to drink more than 14 units per week and spread the units over the week.

Smoking doubles the risk of dying from a stroke, “but once you stop your risk of stroke drops immediately,” says the Stroke Association.

Being overweight or obese can also increase the risk of stroke.

A history of migraines is associated with anxiety and mixed depression...

Ginger Tea: Amazing Benefits You Can’t Miss Out On

Australians suffering from chronic migraines are finding that their condition is...