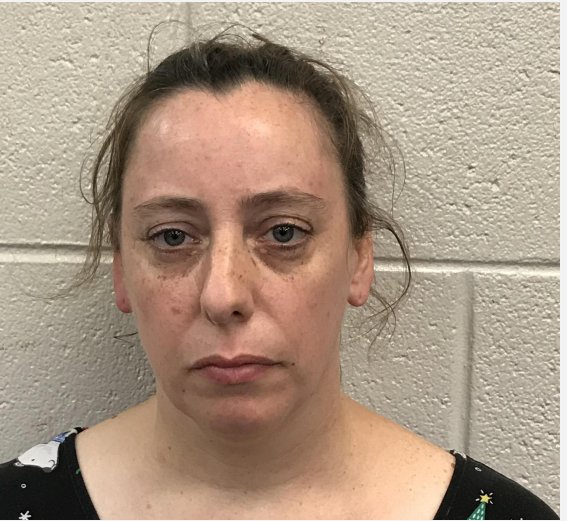 A Cottageville woman reportedly attacked her husband with a knife last week and rushed him to the hospital with a severe laceration.
Raeona K. Turner, 43, faces high and serious domestic violence charges related to the incident.
According to an incident report from the Cottageville Police Department, an officer was conducting a property check on the Cottageville Express on July 6 when a man approached the officer and asked him to check on his parents, who had previously fought. The man said that when he returned to the house there was “a lot of blood” on the back stairs of his house and the door was locked. So he went and sought help from an officer.
The Cottageville officer called another unit to help and then went to the residence on Clydeville Lane to investigate the man’s allegations.
When the officer stood at the door of the house, he saw a woman – Turner – trying to leave the apartment. When the policeman spoke to the woman, she said that everything was okay and that she and her husband had argued beforehand. When the officer asked where the blood came from, the woman said she and her husband were arguing when her husband picked up a step stool. She thought he was going to hit her, so she grabbed a knife.
“She said that he turned to her with the step stool, she stabbed him,” the report said.
The woman also said she took her husband to the hospital.
When the officers entered the house, the officer said in his report that he noticed “a large amount of blood on the floor and equipment,” he said.
The man was at Colleton Medical Center, where he was being treated for a stab wound on his left forearm.
The woman was arrested and taken to the Colleton Detention Center. This case is still being investigated.

Water flows into the Colleton man’s petrol tank
One man reported to the authorities that someone had put water in his gas tank. The incident was reported on June 23 when the man went to the headquarters of the Colleton County Sheriff’s Office and filed the report. According to the victim, this incident took place in his apartment on round O. The case is being investigated for damage to a vehicle.

Fire department construction site of the attempted break-in
Police officers were called to Pierce Road on June 24 when an unidentified person attempted to break into a Colleton County fire station. An unknown suspect attempted to enter Ward 34, according to an incident report from the Colleton County Sheriff’s Office. At this point, there are no known suspects and nothing is reported as stolen, the report said.

Man leads police officers in slow chase
A 64-year-old man from Colleton is charged with crack cocaine possession after being caught at a traffic stop. According to an incident report from the Colleton County Sheriff’s Office, a MP was on a routine patrol down the Augusta Highway when he saw a blue Ford pickup truck with an inoperative tag light and a plastic license plate cover that blocked the MP’s view of the Day blocked. The deputy stopped the driver and then asked him to get out of the car. However, instead of doing so, the driver started the truck and then fled on the Augusta Highway towards Interstate 95, the report said. However, the driver only drove 16 mph. He came to another stop near Truck Stop Circle C and the deputy again asked the driver to get out of the vehicle. A search of the driver found 0.2 grams of cracked cocaine. He is accused of possessing crack cocaine.

Man caught choking a woman in a parked car
The Colleton County Sheriff’s office received an 911 call on June 27 that a man was seen choking a woman in a parked vehicle at an Interstate 95 rest area. The MPs went to the rest area and talked to the man and the woman. The woman had visible neck injuries and complained of neck pain from the attack, the report said. The woman was taken to Colleton Medical Center for treatment for her injuries, and the 31-year-old man was charged with second degree domestic violence and taken to the Colleton Detention Center.

Colleton man drives 10 miles before stopping for blue lights
A 41-year-old man from Colleton led officers on a brief chase last week when he refused to stop for a proxy. According to an incident report from the Colleton County Sheriff’s Office, a MP was in his patrol car on the Cottageville Highway when the suspect passed him. The MP said in his report that he could see that the driver was unbuckled. The vehicle also had a defective day of lag. When the police officer tried to stop the man, the driver continued and drove back about 10 miles before finally stopping. Speeds did not exceed 65 mph, the report said. When the driver stopped, he was handcuffed. The deputy said in his report that the driver was not insured and his driver’s license had been revoked. The driver was charged with failing to stop when the lights flashed and driving under suspension, third offense.

Woman caught trashing
A woman threw a beer bottle into another woman’s driveway last week, which broke the bottle and the homeowner called authorities. According to a Walterboro Police Department incident report, a 65-year-old resident of Moore Street in Walterboro told police officers that a vehicle pulled up outside her home on July 3. Then a man got up from the driver’s seat and told the passenger to get rid of her open beer bottle. The two quarreled, and the woman threw the bottle into the homeowner’s driveway, breaking the glass bottle. The officer was able to use a description of the car and locate the vehicle shortly after the crime was reported. According to the driver of the car, the passenger threw the beer. The man said he did not know the woman and had picked her up to take her away. When he saw that she had an open bottle of beer, he told her to get rid of it, the report said. The man returned to the victim’s house and cleaned up the rubble.

Man was caught stealing car washes on camera
A 41-year-old Walterboro man was caught on video stolen from the self-service car wash on Jefferies Boulevard in Walterboro. According to an incident report by the Walterboro Police Department, the complainant called the police when he saw the suspect steal industrial-grade foam brushes, industrial-grade hoses and various connectors from the car wash. The man was caught on camera backing his Chevy Silverado truck to the car wash, climbing on his truck to reach the foaming brush, then removing it and placing it on its back. The man also tried to pick a bolt lock to get inside the car wash, but failed, the report said. The man was also caught in front of the camera trying to break into the machine, but failed, the report said. The stolen devices are valued at $ 1,000. The man inflicted about $ 500 damage on the machine, a door he tried to break into, and a vacuum cleaner in the car wash. The suspect has been identified and the case is under investigation.

How Do I Relieve Neck Pain?