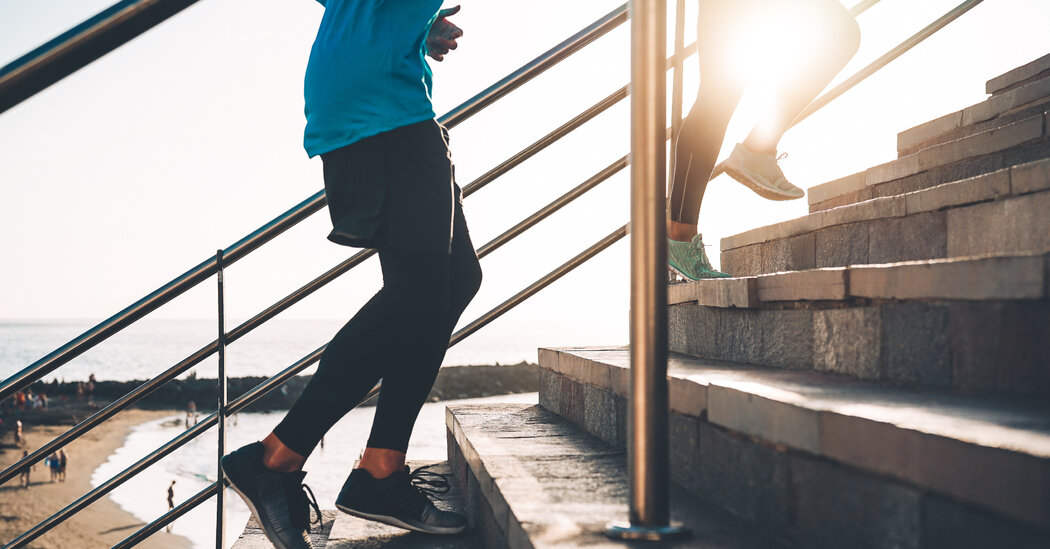 A new study confirms that you don’t have to do a hard workout to reap the longevity rewards of exercise.

Dashing up the stairs to your apartment, weaving between commuters as you dart toward the train — those small snippets of exercise, if they’re intense enough, can add up, according to a new study. The paper is among the first to examine what many exercise scientists have long hypothesized: A little bit of physical activity goes a long way, even movement you might not consider a workout.

The paper, published today in Nature Medicine, shows that tiny spurts of exercise throughout the day are associated with significant reductions in disease risk. Researchers used data from fitness trackers collected by UK Biobank, a large medical database with health information from people across the United Kingdom. They looked at the records of over 25,000 people who did not regularly exercise, with an average age around 60, and followed them over the course of nearly seven years. (People who walked recreationally once a week were included, but that was the maximum amount of concerted exercise these participants did.)

Those who engaged in one or two-minute bursts of exercise roughly three times a day, like speed-walking while commuting to work or rapidly climbing stairs, showed a nearly 50 percent reduction in cardiovascular mortality risk and a roughly 40 percent reduction in the risk of dying from cancer as well as all causes of mortality, compared with those who did no vigorous spurts of fitness.

The new research is part of a long tradition of research into quick blasts of exercise, usually with traditional workouts, like running on a treadmill or using an elliptical trainer at the gym. Interval training, which means engaging in short stretches of increased power or speed during a longer workout, has long been popular in the athletic world, said Jamie Burr, an associate professor of human health and nutritional sciences at the University of Guelph in Ontario who was not involved with the research.

One 2020 study linked four-minute bursts of exercise with longer life spans; another in 2019 found that climbing stairs for 20 seconds, multiple times a day, improved aerobic fitness. And still others have found that repeating just four-second intervals of intense activity could increase strength or counteract the metabolic toll of sitting for long stretches of time.

“Intensity is very effective at building muscle and stressing the cardiovascular system,” said Ed Coyle, a professor of kinesiology and health education at the University of Texas who has researched intense bursts of exercise. Quick blasts of vigorous exercise, performed repeatedly with short rest periods, can increase oxygen uptake and keep cardiac arteries from clogging, he said, as well as power the heart to pump more blood and function better overall.

The new study, however, shows that the average person doesn’t need to go out of their way to identify those small spikes in activity; everyday movements, intensified, can be enough. And because they collected data from trackers that participants wore on their wrists, rather than questionnaires, which some exercise studies rely on, the researchers were able to analyze the impact of minute movements.

“It really just emphasizes how little vigorous physical activity can be extremely beneficial,” said Martin Gibala, a professor of kinesiology at McMaster University in Ontario who was an author on the study.

Fitness researchers lump exercise intensity into three categories, said Emmanuel Stamatakis, a professor at the University of Sydney’s Charles Perkins Centre and the lead author of the new study. If you can sing while doing the activity, that’s light exercise. If you can’t sing, but you can speak comfortably, that’s moderate. Dr. Stamatakis recommended movements that are so vigorous you can only speak a few words, or none at all, after 30 seconds or so.

For those who exercise regularly, you can tap into some of the benefits of short bursts by adding a sprint into your run or bike ride, Dr. Burr said. “Even a few bouts in someone who’s well trained can add a little spice to it,” he said.

Dr. Stamatakis also offered a few ways for people to incorporate small bouts of movement into their lives. If you have a roughly half mile-long walk — for example, from your apartment to the grocery store — you don’t need to sprint the entire time, he said, but accelerate your pace for a few hundred feet two or three times over the course of your walk. Instead of taking the elevator, opt for the stairs. As long as you go up more than one or two flights, that will count as vigorous activity. Carrying roughly five percent of your body weight for a minute or two can also qualify, like hauling a large backpack, he added. And any kind of brief, fast uphill walking can also provide a short spurt of intense exercise.

“It doesn’t have to be planned throughout your day — you’re playing with your kids, you can engage with them in a more vigorous manner,” Dr. Gibala said. “You’re bringing your groceries out from the car, you can pick up the pace. You can say: these are my activities of daily living, I can huff and puff a bit while I’m doing this.”

Body weight exercises you can do anywhere, no equipment needed – The Washington Post

Wearing a mask when you are doing indoor Exercise is a...

Is There A Perfect Temperature for Exercise? — PezCycling News