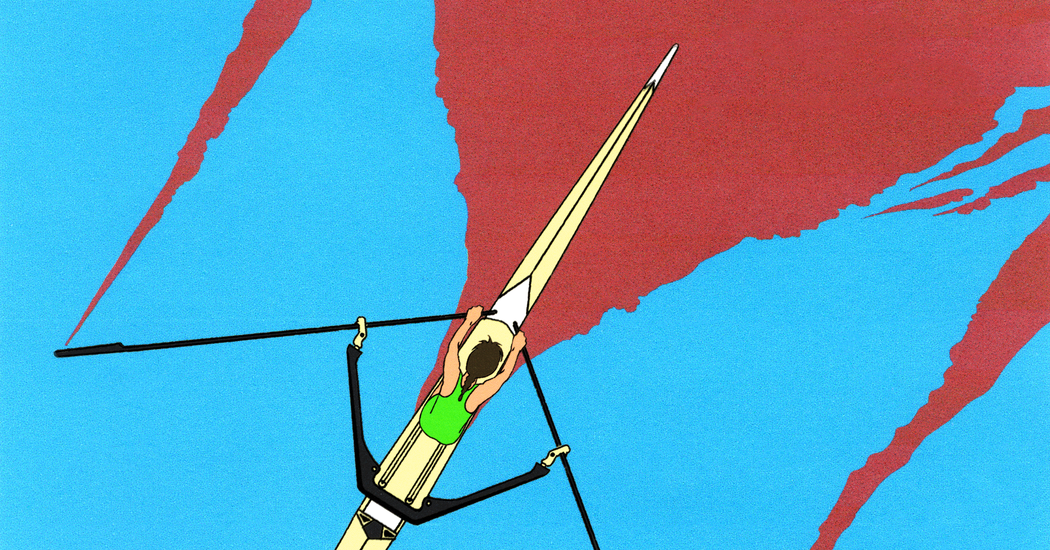 When I was a junior in college, I joined the rowing team. The unthinkably expensive boats gliding down the Charles River enchanted me. But I was also drawn to something else: I’d heard crew was brutal. In the aftermath of a chaotic adolescence, I felt constantly on edge. What more wholesome way was there to burn off the feeling of hot poison in my veins than with a movie montage of fitness, pounding up stadium stairs while wearing a visor? In a tunnel of fire, I hoped to find relief.

I didn’t crave just intensity — I wanted pain, a sensation that would distract me from my emotional turmoil. This desire was nothing new. When I was 12, living with my mom in Minneapolis in a squalid house filled with waist-high piles of trash, I scratched at my wrists with safety pins. A few years later, in my bedroom at my foster home, I pulled down my Levi’s and sliced at my thighs, using kiddie scissors with blue plastic handles, until relaxation enveloped me.

When adults found out — the nurse at school, my foster parents — they pressed their hands to their mouths in shock, then chastised me. I knew self-harm was capital-B Bad and shameful, despite the calm it offered me. By the time I got into Harvard, against all odds, I’d resolved to never do it again. Instead I started jogging, then joined a CrossFit club and found, to my delight, that intense exercise could soothe me in a similar way to my old vice.

If cutting was mental illness made visible, rowing represented the pinnacle of health. As I grew fitter, I felt more and more disdain for my younger self who’d clung to a gross, lowbrow habit that made people flinch and recoil in disgust. No one would see me in my uniform and think I needed help. I relished that illusion, despite its perils: I wouldn’t seek professional therapy for years, a reckoning that might have come sooner if I’d embraced a less sanctioned coping mechanism, like alcohol or drugs. Self-righteous about my so-called wellness, it became easy to blame those who managed stress, anxiety and depression in more obviously destructive ways. My contempt for my teenage self blinded me to the pain of others — and to the risks of my new, supposedly healthy approach.

Crew hurts, from the dull grind of training to the lactic-acid hell of regattas. The first time my coach gave me and the other novices an erg test, to see how we performed on a rowing machine, I braced myself for the breathless, blackout-inducing exertion, then held on for dear life as my oxygen-starved muscles screamed. With every stroke, I meditated on all I’d lost and pulled harder. I got the best score. Then I looked around at the prep school recruits and decided that, in a sport all about suffering, I could endure more than them.

I ran loops around Fresh Pond in the mornings before practice. I woke up so sore I could hardly walk. I believed I’d found the cure for the depression and trauma that had plagued me for years: Start running and just don’t stop. And unlike cutting, which got me scolded, my athletic efforts were rewarded. I made it to the N.C.A.A. Division One championships that first year. The coaches praised me. I walked with the confidence of a jock and took pride in wearing tank tops.

The only people who were skeptical were my more seasoned teammates: They rolled their eyes at my extra workouts and warned me I would get injured. A year and a half into my rowing career, I proved them right. After an especially aggressive erg session, the muscles along my spine throbbed. I took three ibuprofen, applied Tiger Balm and went for my normally scheduled second workout: a five-mile run followed by a yoga class. The next day, I returned to the erg. My back still ached.

The coaches and the doctor and the trainer all examined me, but nothing was obviously wrong. Like most injuries, this one was from overuse. The only real treatment was rest. But almost as soon as I switched to low-impact workouts, I stopped being able to sleep through the night. I woke up in my dorm room in a panic at 2 a.m. and lay awake for hours, spiraling. My limbs felt flushed and itchy, and it seemed like the only cure was to train.

Unlike many college athletes who are pressured into performing while injured, I had a choice. Harvard’s financial aid had nothing to do with sports. My coaches were wonderful women who cared deeply about their athletes.

The back pain eased but didn’t vanish; eventually I was cleared to row. I made it to the national championships again. After my final race, I got in the car only to find that sitting was excruciating.

Yet I didn’t stop. After graduating I worked at Google, where many of my software engineer colleagues were obsessed with fitness. For the same reasons many people drink or use drugs — to deal with tension and anxiety — we filed into a conference room at 5 p.m. for ab routines. Even though my spine seized after deadlifting, when stress got bad, I worked out even more. I earned my best Peloton scores when I was miserable, which let me believe that, once again, my pain could be my strength.

This fantasy was far more perilous than anything I’d ever thought about cutting. Hacking at myself was simple self-harm, with no bright side, and so it had been comparatively easy for me to stop. Quitting overexercising was more difficult because it was praised instead of pathologized.

Even when my exercising had obvious negative consequences, people responded completely differently than they did when I cut myself as a teenager. During a ski trip after college, I tumbled between black diamond runs and got a concussion, bashing my head into packed snow. My doctor warned me not to do anything that could result in another brain injury; six weeks later I went to a yoga class and got kicked in the face. I had to start wearing glasses, followed by therapy to learn to refocus my eyes.

During my post-concussion rest, my back flared up; after an MRI I learned I had degenerative disc disease and several herniated discs. “This is normal with aging,” the doctor reassured me. I had just turned 27. I trotted out these anecdotes as fun party stories about my bougie misadventures rather than clear warning signs that I had a problem. Meanwhile, I avoided wearing shorts, terrified of the disgust my scars would elicit.

When friends in turmoil turned to alcoholism and eating disorders, I avoided them. I had no idea how to confront them or how to sit in the presence of distress that seemed so unproductive. I surrounded myself with professionals who used work to distract themselves from their demons, until the endless busyness consumed them.

My ski accident came as my workouts were reaching a breaking point. I’d developed such a high tolerance that at the end of a six-mile run I still couldn’t shake off the hot, crawling feeling. After years without considering self-harm, I longed for the relief a razor blade would provide. That urge horrified me, providing a wake-up call.

I went into exposure therapy for post-traumatic stress disorder, where I went over the worst moments of my life again and again. The point was to become as upset as possible and then to sit with it, to prove to myself that eventually the sensation of fire ants in my viscera would dissipate.

Facing my history head-on, I started to see that I could never undo what had happened. No achievement, athletic or otherwise, no prestigious job or expensive hobby would turn me into someone who hadn’t grown up in a garbage house, then faced the desperation of a girl navigating impossible systems. I could take joy in the power of my body, but I would never be reborn. Hurting myself would never negate the ways other people had hurt me.

I live every day with the fallout of my extreme fitness regimen. I’ve taken obscene quantities of painkillers, including muscle relaxants, medical marijuana and opiates. One year medical insurance from my tech job paid out five figures for acupuncture, physical therapy and chiropractor visits, options that hadn’t been available to me before because of their often staggering cost — treatments that kept me from doing desperate things to deal with my discomfort. My ski and yoga accidents shrank my short-term memory. I still have trouble sleeping through the night, sometimes because of flashbacks, other times because of pain. If I don’t move enough my back flares up, forcing me to walk a fine line so that neither exercise nor my injury dictates my days.

But unlike when I was a struggling teenager, when my mom chided me about how much money my mental health care cost “the taxpayers of Minnesota,” I face no additional shame or social consequences for my questionable decisions. That fact gives me empathy for my younger self, and for anyone else who has no $40,000 boat to row and copes however they can.

Emi Nietfeld (@eminietfeld) is the author of “Acceptance: A Memoir.” Previously, she was a software engineer at Google and Facebook.

The Times is committed to publishing a diversity of letters to the editor. We’d like to hear what you think about this or any of our articles. Here are some tips. And here’s our email: [email protected].

It’s the only exercise that all of us need to perform:...

It’s not a huge amount of exercise to combat depression, a...

5 top equipment exercises that will help you shed belly fat...