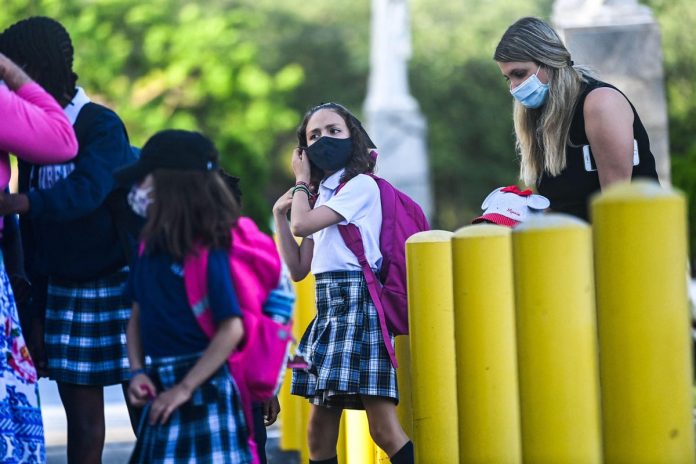 On August 30, the Sarasota County, Florida School District introduced mandatory face masks for all students. The only exceptions would be those who could provide a form signed by a health professional stating that there was a medical reason for their being unable to wear a face mask. And voilà, just like that, over a thousand students in Sarasota County have given their schools such signed medical exception forms. Who would have thought that so many students have real medical reasons not to wear face masks?

Guess who signed about a third of these forms. If you answered a pediatrician, a head and neck doctor, or a pulmonologist, you should be corrected. The answer rhymes with Velociraptor, or a man in a tractor. Apparently, a chiropractor named Dan Busch, DC, CCEP has signed over 500 medical exemption forms for students in the school district, Ryan McKinnon reports for the Sarasota Herald-Tribune. Yes, a chiropractor.

As you can see on the news, people seemed to be lining up to see the chiropractor as if waiting for an autograph session with Justin Bieber.

A chiropractor may not be the first person to think of when you have severe breathing problems. Or the second. Or the third. Or even the twentieth. If you’ve heard “I can’t breathe, I really need a chiropractor” so many times about getting a nickel, how many nickel would you end up with? The Merriam Webster dictionary defines chiropractors as “a licensed physician who treats disorders (such as back and neck pain) primarily of the musculoskeletal system, specifically by manually adjusting or manipulating the vertebrae to correct dysfunction of the nervous system”. How much of it screams, “being able to determine if someone can wear a face mask?”

The Twin Palms Chiropractic website mentions that Busch’s practice includes “nutritional counseling and massage therapy” and “treatment of injuries, rehabilitation of extremities, disc disease” but no mention of respiratory problems or the nose or mouth.

McKinnon’s Sarasota Herald Tribune article also reported that there were rumors that Busch’s office was distributing “pre-signed forms.” This reportedly prompted Superintendent Brennan Asplen of the Sarasota School District to introduce a new version of the face mask exemption form. This updated version limits who can sign the form to a doctor, osteopathic doctor, or nurse.

As you can imagine, the school district does not force the wearing of face masks just for fun or to limit people’s freedoms. They are doing it because the Covid-19 coronavirus continues to increase in Florida. And children tend to have noses and mouths. In addition, most children cannot yet be vaccinated. Without wearing a face mask, an infected student could spit virus in the air, like someone doing the Savage TikTok dance while holding a water sprinkler. While a face mask may not be able to stop all of these viruses from getting into the air, masking it can at least reduce the amount of virus.

A masked school mascot in a bobcat costume greets the students when they arrive on the first day of school … [+] Class for the 2021-22 school year at Baldwin Park Elementary School. Due to the recent surge in COVID-19 cases in Florida, Orange County public schools have introduced a face mask mandate for students for 30 days unless a parent opts against the requirement. (Photo by Paul Hennessy / SOPA Images / LightRocket via Getty Images)

Therefore, the school district requires all face masks to be worn except those who can produce a form signed by a licensed doctor stating that they are “due to a medical, physical, or psychological contraindication.” This exception is for humans who really have a legitimate reason why they can’t wear face masks, such as having difficulty breathing instead of “just not feeling like it”.

In order for a healthcare professional to sign a medical exemption from a face mask requirement, that healthcare professional must actually verify that there is actually a real medical reason why the person cannot wear a face mask. The Centers for Disease Control and Prevention (CDC) lists three categories of people who are exempt from the face mask requirement. The first would be a child under the age of two. Now you probably don’t need a doctor to check if your child is under two years old. It should indicate that your child was born last year or doesn’t yet have a mustache. Also, what the peck would you do if you sent someone two years or younger to kindergarten or elementary school.

The second category is those with a disability who cannot or cannot safely wear a mask for reasons related to the disability. There aren’t too many disabilities or conditions that would really prevent the use of face masks. To be unconscious is certainly one. However, sending an unconscious child to school is usually a bad idea. Instead, you may want such a child to be examined by a doctor. You don’t want to say: “Oh, little Emma”, “Oh, little Axl” or “Oh, little tablecloth” or whatever you called your child, “are unconscious again? How many times have I told you not to be passed out? ”

Florida Governor Ron DeSantis has spoken out against local requirements for face masks, despite the … [+] The Covid-19 coronavirus delta variant continues to increase in Florida. (Photo by Joe Raedle / Getty Images)

For this reason, a face mask exemption form should be signed by a doctor or nurse who has been seeing your child for some time. If you see a doctor just to get a face mask exemption, that’s not cool. You are basically trying to bypass a rule that is meant to protect everyone. This can be akin to trying to hide your pee or poop in a swimming pool.

Incidentally, the third reason the CDC may give for not wearing face masks is “an individual for whom wearing a mask would pose a risk to health, safety or job duties as determined by the workplace risk assessment” . Now it’s hard to imagine your child having such an important job at school where people have to see their mouth at all times. In such a case, too, there are face masks with transparent windows.

Remember, not all health professionals are created equal. You probably wouldn’t go to a rectal surgeon to look into an ear problem even if the rectal surgeon said, “A hole is a hole”. It should also be clear what chiropractors are specially trained and licensed for. And what they are not.

When it comes to face mask exemption forms, there is a concern that some people see signing such forms as a way to make money quickly. Because surprise, surprise, there are people who are ready to surprise, to surprise, to benefit from any situation, even if it means putting others in danger. While not necessarily out for a profit, they could try to make a political statement that shouldn’t be associated with public safety.

Therefore, school districts may want anyone who signs a face mask waiver to fully document how long he or she has seen the child, what expertise he or she has in making such a determination, and what the specific findings and reasons for the face are Mask exemption. By making the form more complex, you can prevent games like providing presigned forms. It could help correct things and prevent someone from manipulating the situation, so to speak.

Evaluation for neck back discomfort in the patient Emergency Live International

What are memory foam pillows and are they worth the money?